In January 2019 two workshops were held at the headquarters of the German utility company Stadtwerk Haßfurt GmbH. The overall goal was to get the first insights in the design of a Smart Energy Management Dashboard (SEMD) for utility companies and energy Prosumers. Whereas the first workshop attended the utility and its employees, working on energy planning, and the second one customers, who already are sensible to the production/storage of renewable energy in their homes. These customers were so called Prosumers, that do already have installed energy producing plants at home (e.g. Photovoltaics, micro-CHP or even battery storage).

The utilityworkshop was attended by four employees of the partner SHF, who are integrated in the process of energy analysis and planning of the electrical grid in Haßfurt. In the beginning, the SIT4Energy project with its scope, the objectives and the expected and already available results were presented to the participants. After that, initial mock-ups of the SEMD were shown. In-between the presentation the participants had the opportunity to give feedback and note their thoughts. The regional company has no tool to plan energy demand and production, yet. This is done by hand since a long time and needs quite much of experience to interpret the conditions for the upcoming days. Summing results of the discussions up, a tool to visualize and intelligently analyse the energy production, consumption and storage capacity in the various grid sections is very welcome and useful for the company. Thus, the various visualization of data should be simplified in the overview and can be detailed by the user itself on specific demands. The tool could help very well to get a better understanding of the processes in the grid and may uncover hidden strategies to optimize the energy flow in the own grid.

After that, the Prosumer customers of SHF arrived at the location and the setup for the follow-up workshop was prepared by the moderators of HOST/SHF. Six participants attended the workshop and were informed about the SIT4Energy project in the first step. An initial introduction of the Prosumers and their handling of energy production/consumption/storage at home was followed by the presentation of initial mock-ups of the Smart Energy Management Dashboard for Prosumer end-users. During that, the participants had the opportunity to give feedback and note their thoughts, as well as in the preceding workshop. It was quickly clear, that the attending customers already use various third party and self-made calculation tools to analyse their energy flow and costs. It also appeared, that the main driver for installing renewable distributed energy sources is still the economy. Of second interest the reduction of greenhouse gases is often mentioned. Of big importance was the usability of the dashboard, meaning an easy overview after logging in and giving the opportunity to get more details on demand. Furthermore, the comparison of own production units’ performance to similar units in the region was a main point of discussion to watch the operating point regarding predictive maintenance. Concluding, the event was very productive as the participants realised, that the tool can help to monitor, analyse and keep track of their energy demand/production/storage and in relation to costs in real-time, by helping to uncover many hidden energy savings opportunities, even to customers, not familiar with enhanced energy management, yet. The overall idea of SEMD was accepted by the participants as a suitable and easy applicable energy management tool with full extent. 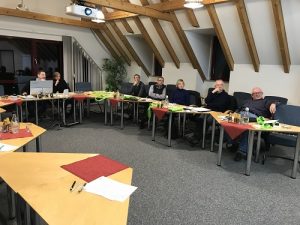 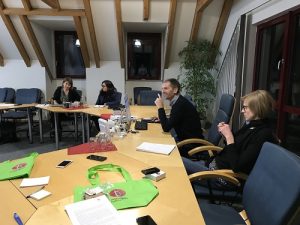 The workshop was held in Haßfurt. There were 40 citizens as guest in total. The Project was presented by Haßfurt’s general manager and contact details to sign up for the workshop and the project overall were given to the participants. Also, the collaboration with the “university of applied sciences Amberg-Weiden” was announced , making Haßfurt to a real world test laboratory for energy appliances.

SIT4Energy 2nd Plenary Meeting, held on the 15th and 16th of October, 2018, brought together the consortium and successfully set the requirements for shifting up gears. The meeting was organized in the Centre for Research and Technology-Hellas (CERTH) headquarters in Thessaloniki, Greece. The discussions focused on the presentation and organization of the work packages and the deployments in each of the pilot scenarios, starting from the test-bed in Thessaloniki (Greece), the households in Hassfurt (Germany) and the university in Athens (Greece). 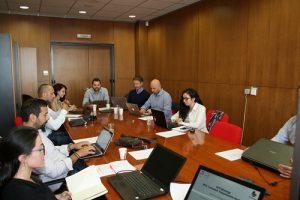 German and Greek organizations have joined hands to provide evidence, frameworks and tools for motivating and supporting behavioral change of energy end-users, in tertiary and residential buildings, towards energy saving. Through the “Greek-German Bilateral Research and Innovation Cooperation ” funding measure, five entities from Germany and Greece will work together to present to end-user prosumers analysis tools and recommendations for energy efficiency actions, enabling them to realize energy savings potentials, so as to widen user adoption of such techniques and increase their effectiveness.

The Sustainable energy is hands down one of the biggest challenges of our times. As the EU sets its focus to reach its 2020 goals, the role of private energy consumers becomes prevalent. The EU and member states are beginning to understand the need to complement supply-related measures (e.g. smart/efficient buildings, appliances and meters) with consumption-affecting initiatives (e.g. consumer empowerment, information and education, energy taxes and incentives)1.

However, researchers and practitioners alike have long realized that convincing consumers to change their behaviours (e.g. reduce energy consumption, switch to higher efficiency products) can be notoriously evasive: decision making complexity, known and undocumented biases and the infamous intention behaviour gap are only a few of the broader reasons why so many initiatives were unsuccessful to produce consistent results in the sustainable energy domain. In addition, infrastructural difficulties (diverse requirements in data procurement, privacy, policy/regulation diversity) in combination with the inherent technical nature of energy bills and the billing system in general further hamper our ability to deliver the much-necessary consumer empowerment.

SIT4Energy will develop a smart system and customer-centered applications for integrated energy management in prosumer scenarios that consider both the efficiency potentials in the local energy production and in the energy consumption. The developed prototype system and customer applications will be deployed and evaluated in real-world pilots in two different climatic regions, Greece and Germany. This will enable the transfer of developed solutions into new commercial offerings of the participating SMEs; a municipal utility company in Germany (SHF) and an innovative IT-service and software development company in Greece (ITML). The validation in pilots will thus serve as the preparation for the uptake of the developed solutions by the German utility (SHF) who will provide it as a service to their customers and as a marketing showcase for the commercial exploitation by the ITML. The research and university partners (CERTH, HOST) will exploit the results through scientific publications, development of new projects and transfer in teaching and consulting for the regional SMEs.

Any cookies that may not be particularly necessary for the website to function and is used specifically to collect user personal data via analytics, ads, other embedded contents are termed as non-necessary cookies. It is mandatory to procure user consent prior to running these cookies on your website.